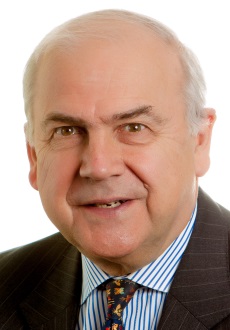 While donor-advised funds are not new, they are enjoying heightened visibility within the wealth management industry. A donor-advised fund (DAF) is a private account within a private or public foundation. The donor makes an irrevocable gift to the foundation and receives a tax receipt. The sponsoring foundation may be a private or public foundation established for the purpose of administering DAFs, a community foundation that administers DAFs in addition to other funds, or a charity that offers supporters a DAF as a giving option. DAFs appeal to individuals with strong giving habits, a planned and tax-sensitive approach to their financial affairs, and an interest in establishing a structure that can be multi-generational in character.

The first DAF was established in 1931 by the New York Community Trust. Little did the trust know that their action would result in a new line of business for some of the leading fund companies, investment managers, and dealers in the United States and Canada. In its 2017 Donor-advised Fund Report, the National Philanthropic Trust reported that at the end of 2016, there were approximately 285,000 DAFs holding $85.2 billion in assets. Of this total, Fidelity Charitable reported holding $21.1 billion and Vanguard Charitable reported $5.8 billion (both as at June 2016). It’s not only the asset totals that are impressive but also the flow of donations. Total contributions to DAFs in 2016 amounted to $23.3 billion.

In Canada, the entry of financial services firms into the DAF sector is attributed to the Private Giving Foundation established by the Toronto-Dominion Bank (TD) in 2004. In addition to the TD, which at the end of 2016 reported assets of C$297 million, IGM, the parent of two of the largest Canadian fund companies, has a foundation which reported DAF assets of C$221 million. Between 2012 and 2016, DAF assets held in foundations associated with financial institutions more than doubled to $1.5 billion with a four-year CAGR of 21.9%.

DAFs have been positioned as the “poor man’s foundation.” Although entry levels of $10,000 or lower allow DAFs to appeal to a wide range of donors, the facts suggest that the appeal has been strongest to those families with substantial assets. The average account size was approximately $300,000 at the end of 2016. In many cases, accounts are funded through liquidity events or, in some cases, a generous employment bonus or divorce settlement. 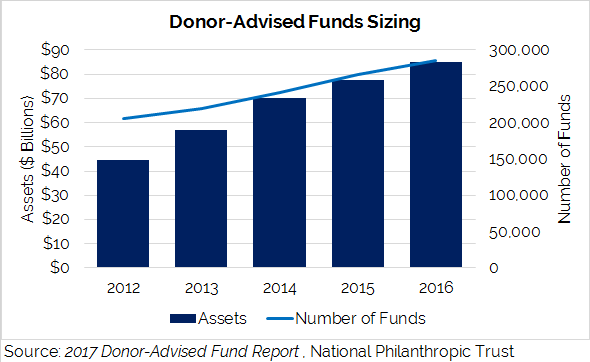 US-based donor-advised funds have seen strong growth in recent years, nearly doubling in assets between 2012 and 2016.

While fund companies and banks have been at the forefront of the DAF expansion, without the increased attention being paid by financial advisors, the growth could have been muted. In the 2017 Schwab Charitable Annual Report, it was reported that 42% of their DAF accounts were associated with an advisor, up from 33% in 2013. The future link between philanthropy and financial advisors is likely to become even closer. In the Charles Schwab 2017 RIA Benchmarking Study, 85% of advisors indicated that they either offer or plan to offer philanthropic planning services.

Despite the grant-making activity of the DAF account holders, there are critics. Some suggest that Wall Street is taking over the charitable sector with a plot to hoard assets rather than encourage their use for social purposes. Others feel they should be more strictly regulated to avoid abuse and misuse, while another group of critics view DAFs as a money maker for the sponsoring foundations.

Despite the critics, donor-advised funds are likely to grow in importance to both financial institutions as well as to financial advisors who are broadening their focus beyond retirement. The recent growth of DAFs reflects the overall growth in charitable giving as well as the search by investors for straightforward and cost-effective ways to manage their giving. Ignoring the trends may be costly in terms of broadening relationships beyond the individuals to the family as well as in terms of losing assets to competitors who have embraced DAFs.