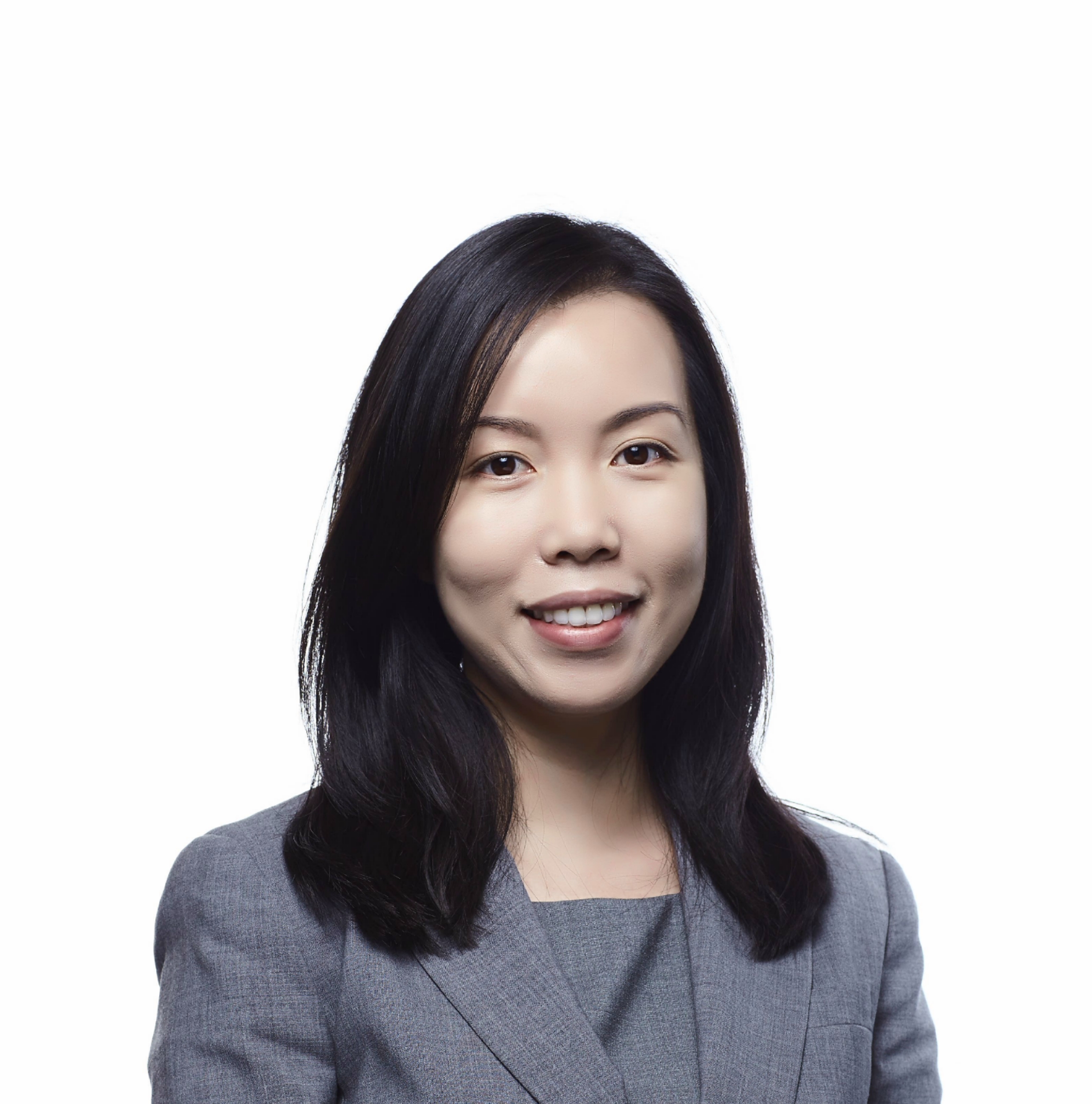 The 2017 bull market provided an environment in which many investors were comfortable riding the wave through passively managed products rather than active products. Fluctuations in the U.S. stock market throughout 2018 have not reversed such flow trends in the subadvised space. As the majority of the $2.7 trillion subadvisory industry is in active products (approximately 85%), subadvised funds experienced similar hardship as the broader active space and saw net outflows of $98.1 billion in the year-to-date period through November.

While U.S. equity, namely large cap, is the biggest asset class among actively managed subadvised funds, Morningstar categories that had the most year-to-date net flows as of November 2018 predominantly fell outside that asset class, with the exception of the Mid-Cap Growth category. The ten largest inflow mutual fund categories saw net inflows of $30.4 billion, as the wider space was in outflows. Intermediate-Term Bond led the way for subadvised mutual funds with close to $9 billion of net inflows. The category’s largest contributors were two Edward Jones funds, Bridge Builder Core Bond and Bridge Builder Core Plus Bond, generating more than $8.9 billion net flows combined, followed by Fidelity’s Strategic Advisers Core Income fund, which netted more than $1 billion in new deposits. All three funds displayed above-average performance with a Morningstar rating of four stars. Performance remains important among Taxable Bond funds, but the asset class has avoided the concentration in demand seen in areas like U.S. Equity. In fact, portfolios rated four stars by Morningstar were the biggest group in funds generating net inflows at about 33%. On the other hand, subadvised mutual funds that had outflows were most concentrated in funds that have a Morningstar rating of 3 and accounted for about 38% of such funds. 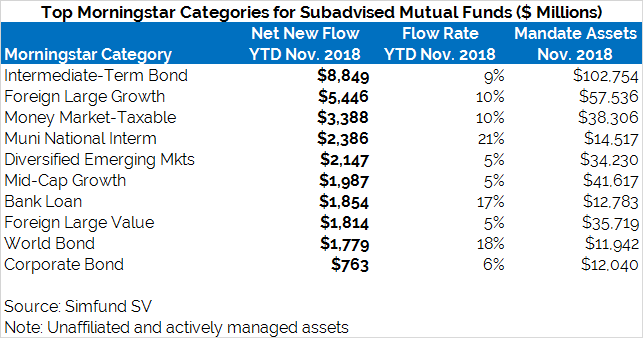 Like mutual funds, top inflow categories for subadvised variable annuities were predominantly outside of the U.S. Equity asset class. Allocation –70% to 85% Equity led in the year-to-date period at $538 million. Outside of Diversified Emerging Markets, variable annuities and mutual funds saw limited overlap in top-selling strategies. Sales of VA funds have been struggling for a while, seeing net outflows since 2013, but 2018 has been the most challenging year over the last decade. While subadvised VA funds accounted for only about 31% of actively managed subadvised assets, variable annuity funds experienced more drastic net redemptions ($55 billion) than mutual funds ($42 billion). It is less clear if performance is as crucial a factor in driving new sales in the VA segment as three-star funds were the most concentrated group for funds that had net inflows and funds with outflows, at about 42% for both. 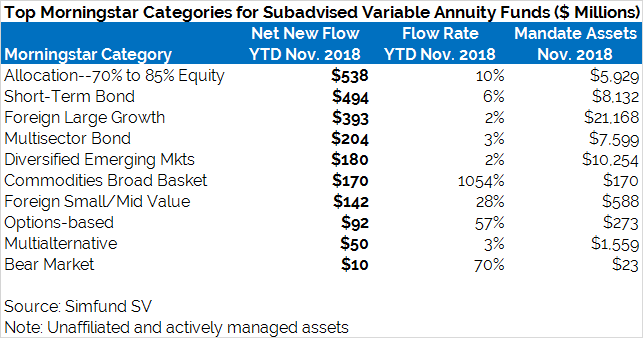 Flows trends indicate that investors have looked outside of U.S. equities for alpha generation and continue to show more confidence in passively managed products despite volatilities in the stock market, presenting opportunities for subadvisers with expertise in more niche asset classes.